Well Tech hockey fans, it’s that time of year again: playoff time. This year’s edition is all new, featuring a new conference and a better off Michigan Tech Huskies (19-11-3, 17-5-3 (2-6) pairwise) team compared to the final playoff season for WCHA men’s hockey. The Huskies are the number 2 seed while also being 12th in the pairwise which both have big implications this weekend as they face off in a best of three series against a recent opponent in the Ferris State Bulldogs (11-22-1, 8-20-1 (3-2) pairwise) for the third time this season. The Michigan Tech Huskies (19-9-3, 17-4-3 (2-5) Pairwise) find themselves out of the CCHA regular season championship as they managed only 4 of 6 points against the Ferris State Bulldogs (10-21-1, 7-19-1 (3-2) Pairwise) in what I could only describe as a sorry weekend performance. They end their season against the league champion Minnesota State Mavericks (29-5-0, 27-5-0 (2-0) Pairwise) at home.

The Bulldogs ended their regular season splitting the Northern Michigan Wildcats dropping game one and then bouncing back for a game two victory. There really isn’t much to cover with this Bulldogs team that wasn’t already covered two weeks ago. They are the preverbal underdogs this weekend. Against NMU, they were spanked 7-1 with Logan Stein getting pulled after 40 mins of play in game one. The shot chart from our InStat data looks like this:

Ferris was more or less kept to the outer offensive zone with only a handful of shots taking place in “Hard Ice”. Meanwhile the Wildcats were able to pepper Stein with good high-danger chances with 6 of 7 going in against him.

The Bulldogs managed again only a handful of shots while NMU again applied a lot of pressure, but this time Stein was able to keep the Wildcats at bay, only allowing 2 goals on 40 shots. There is one additional thing to note and this requires a bit of a modification to our plot: 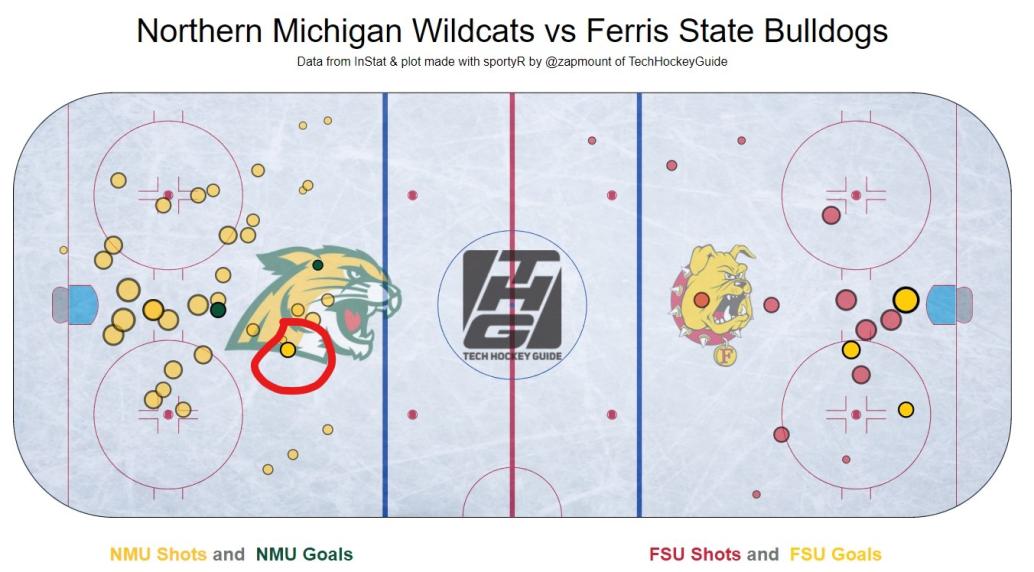 The nicely circled (via MS paint most likely) is FSU’s forth goal that was scored from their own defensive zone as an empty netter. This shows that though the score was 4-2 in reality it was a much more intense game. The Bulldogs have once again shownt they are this year’s CCHA’s agents of chaos to not only the standing but also the pairwise.

Looking at their roaster, here is an updated table of their top players going into this weekend:

Comparing their top players to the Huskies in terms of points per game, the Bulldogs have the equivalent of two Colin Swoyers, two Brett Thornes, and one Tristan Ashbrook. Considering that all the players listed in the table above are being compared to a Husky, the defensemen do not paint a good picture, at least in terms of scoring. Don’t let this comparison fool you though, the Bulldogs have put up 4+ goals on the Huskies twice this year and are the only team the Huskies have faced to do so. To my understanding, during the playoffs teams are allowed to bring three goaltenders and I would expect Stein, Giesbrecht, and Salmenkangas to have made the journey to Houghton. Look for Stein and Giesbrecht to be the favorites when it comes to who starts in net as well.

Our Huskies look to reach the 20 win mark on the year with this upcoming series. They dropped both games at home to the insanely good Minnesota State Mavericks by a score of 2-1 both nights, with game one needing overtime. The Huskies managed to go toe-to-toe with the Mavericks all weekend but fell short in the depth department. This was most apparent after game one’s 5 on 3 powerplay for Mankato where Tech was forced to shorten the bench and couldn’t recover afterwards.

The shot charts from both nights look like this:

Both nights the Huskies managed to crash the net with some prime shots but were not able to get past McKay. The Mavericks were kept to the perimeter most of the weekend but managed to work their way into the Huskies zone late into each game.

Additionally, watching both games, the intensity of play and how both teams were managed gave a feeling of watching an intense game of chess where one mistake would tip the scales in one team’s favor for an extended period of time. Some notable examples are the Mavericks 5-on-3 in game one, or the ending minutes of game two where the Huskies looked very dangerous with the goalie pulled. If the Huskies manage to continue this level of play we could see them ending up in game two of the NCAA regionals for the first time since the 1981 season. This however, is all contingent on if they can keep up this level of play. The CCHA playoffs should allow for ample rest as after the quarterfinal best of three series the semi & finals will be a best of one at the highest seeds home rink.

Keys to the Game

Game one is going to set the weekend’s pace in my opinion. In a 3-game series, the Huskies are given the ability to drop a game to Ferris. However, it should be seen as not an option as it would tank their pairwise and jeopardize their at-large resume. If the Huskies come ready to play, then we should see what we should have seen in Big Rapids: a sweep. If they don’t, this could be a long weekend. MTU wins 4-1, MTU wins 5-2.

The guys on our Chasing MacNaughton Podcast also made predictions for this coming series against the Bulldogs. Season Three Episode Twenty-Four’s liner notes can be found here.

*Flohockey.tv is also the source of all games played in CCHA buildings this season so don’t be afraid to sign up for a month or the year. Flo Sports now has apps for iOS, Android (with Chromecast support), Apple TV, Amazon Fire TV, and Roku.

About Jonathan Zamaites
Jonathan graduated from Michigan Tech in the spring of 2018 with a degree in Physics and Social Science in addition to a minor in Social and Behavioral Studies. He spent his college career watching hockey with the Misfits where he became the treasurer in his last year. When not traveling to away games he resides in Hancock working for a local engineering company and keeping up with all things Tech Hockey.
View All Posts by Author
Chasing MacNaughton S3E24: Finishing #2
S3E25 CALL FOR QUESTIONS with Dave Ellis

Chasing MacNaughton S3E28: A Control to the Chaos

For Brian Halonen: This is Not The End
S3E28 A Control to the Chaos w/Joe Shawhan